Two Women At The Forefront Of The Blockchain Industry

At the 2018 North American Bitcoin Conference,only three of the 88 speakers were female. Blockchain had a diversity problem.Since then, wome 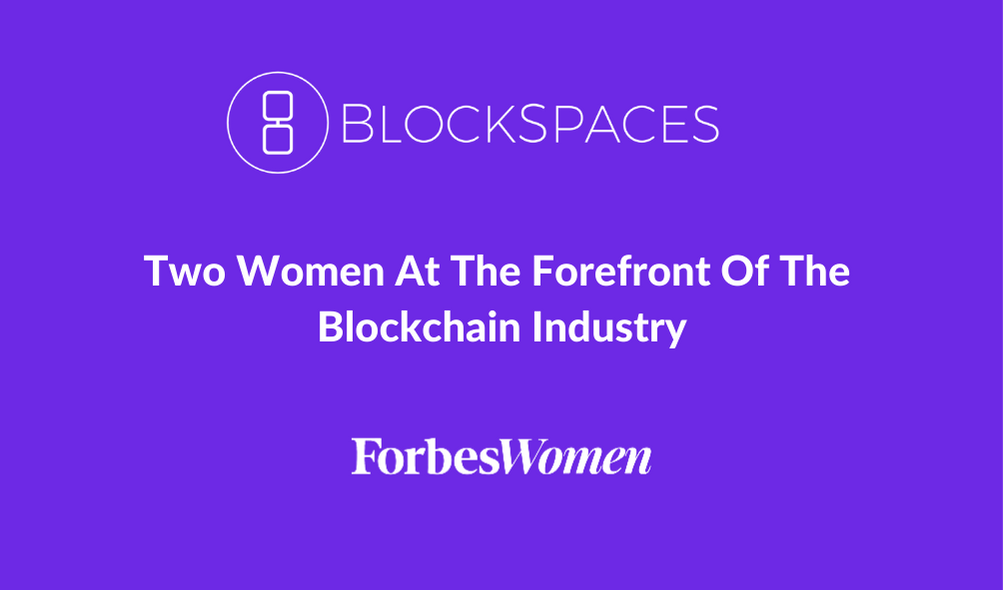 At the 2018 North American Bitcoin Conference,only three of the 88 speakers were female. Blockchain had a diversity problem.Since then, women-led companies and non-profit organizations such asWomen in Blockchainhave arisen to help increase female representation – just in time for the explosion of interest in blockchain due tothe emergence of Web3.

Rosa Shores, cofounder and CEO of BlockSpaces, and Macrina Kgil, CFO of Blockchain.com, are two women at the forefront of this exciting, still male-dominated space.

BlockSpaces, founded by Shores and Gabe Higgins in 2017, allows enterprises to seamlessly integrate their applications with blockchain networks by combining no or low code, drag-and-drop workflows, performance analytics, and managed blockchain infrastructure for optimal security and monitoring. Over the past 12 months, BlockSpaces revenue grew by 40% and customers increased twenty-fold. In January, the company announced the close of a $5.75 million venture seed round.Blockchain.comis a $5 billion company that allows people to buy, sell, and trade crypto. With more than 73 million wallets, the company has handled nearly a third of all bitcoin network transactions since 2012. Kgil is one of the rare women CFOs of a unicorn company, let alone in the finance and crypto space. Since joining Blockchain.com, she has led a $300 million series C funding round, and seen the company double in size and surpass $1 trillion in transactions.

Rosa Shores, Cofounder & CEO of BlockSpacesShores had been trying for months to get an investor for her startup BlockSpaces, but she kept getting turned down. She noticed the only investors she was talking to were men, and thought if she could try a woman investor, things would be different. She then found a Forbes article listing a number of female investors and sent out a cold pitch. Within a few weeks, Ali Rosenthal with Leadout Capital had sent over $1 million for the BlockSpaces seed round.“The only thing I have known in my heart since I was young is that I wanted to challenge the status quo,” says Shores. “But while my mind has been extremely open to any concept that was radically different from the norm, for most of my life the ‘how’ was a moving target. That is, until I learned about cryptocurrency and blockchain technology in 2013. That has become the vehicle to fulfill my life purpose. Although it is a tremendous amount of work, it never feels like just a job. It feels like my contribution to a better world.”The greatest challenge Shores faces is being so early to this space. “Even the most savvy, informed enthusiasts are in a constant state of study and research. You have to be very comfortable with the unknown,” she says.This problem is compounded for her as a woman in emerging tech. The blockchain space is both highly technical and male dominated. “I don’t feel the sexism is overt or even intentional, but it manifests as learned stereotypes that have substantial funding consequences for startups,” says Shores. “It makes competing on an equal playing field tough. That is why it’s so important to attract more women into venture capital right along with attracting more women into tech and blockchain.”

“Embrace the fact that life usually isn’t laid out in front of you in a nice, neat timeline with clear cut phases and transitions,” Shores advises. “It’s completely fine to try something new, no matter the stage of your life or past experiences. You don’t have to decide when you are young (or at any age) what you will do for ‘the rest of your life.’ Understand that sometimes the very best ideas will have the most naysayer. Let your own deep, gnawing feeling guide your life purpose.”

Kgil was born and raised in South Korea. She learned English when her family temporarily moved to Sydney, Australia, where she was one of the only Asian kids in her community. After a short career in the petroleum industry, she eventually moved to finance and got a job that brought her to the United States. In 2018, she joined Blockchain.com. At the time, many of her colleagues in the financial services industry doubted crypto would ever become mainstream. But the company has seen tremendous growth.

A self-proclaimed introvert, Kgil started out as an engineer because she loves problem solving and thinking through processes. But later she decided to take a CPA exam and to learn about business and running a company. “It’s been a much better fit,” she says.“I’ve always been passionate about being able to give financial services access to the average person,” says Kgil. “I have been fortunate enough to be able to open a bank account, credit card, and mortgage without too much difficulty. But that is not the norm for most people globally. Borrowing just $2,000 for everyday emergencies is truly a luxury for many people. With crypto, people can transfer money in an instant.”

Like Shores, the greatest challenge Kgil has faced is that people are only just learning what crypto is and how blockchain works. “It's not about ‘getting rich quick,’ but fundamentally changing commerce for the first time in over a thousand years,” she says. “Imagine explaining this new way of doing business to different countries with all different financial rules! It sure has been a wild ride.”To people looking to tap into their life purpose, Kgil offers this advice. “Be curious. Dive deep into topics to understand them. Think about what you want to spend your time each morning when you wake up.”Artcile by MeiMei Fox Contributor NY Times Best Selling Author