Nearly three-quarters of Americans say they actively try to include locally grown foods in their diets, confirmation that the public is embr 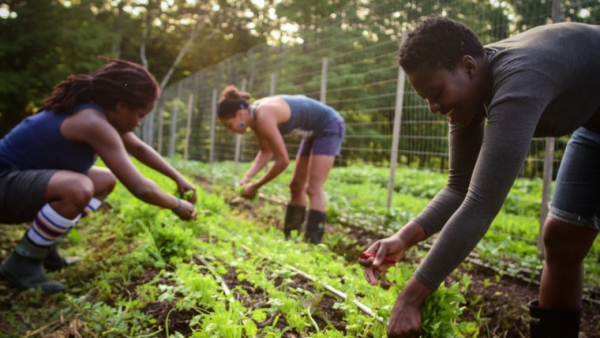 Nearly three-quarters of Americans say they actively try to include locally grown foods in their diets, confirmation that the public is embracing farmers markets, community-supported agricultural programs and the "farm-to-table" movement that have all proliferated in the U.S. since the early 2000s. Americans want to know where their food comes from, how it was made and by whom. They want the transparency that is required to know its source. They’re even willing to pay a little more for the confidence that their food purchases help to create jobs and promote local economies; safeguard the environment, protect groundwater and preserve American farmers and farmland; and support proper animal treatment.

Yet, Black farmers are getting the short end of the stick when it comes to supporting our local farmers. About 60 percent of Black farmers operate on land that has been passed down through generations, known as “heirs property.” According to The Atlantic, this practice was largely born out of necessity due to “legal obstacles that made passing title to future generations difficult.”

Without a clear title to the land, black farmers “have historically been shut out of nearly every USDA program, including disaster assistance,” There are now around 45,000 African American farmers remaining — down from nearly 1 million in 1920. Their acreage has been reduced from 16 million to 2 million, with most of the land loss occurring during the past 70 years. Black farmers make up less than 2 percent of all farmers in the United States and COVID-19 has put small Black owned farms in a state of emergency.

COVID-19 has without a doubt caused a huge impact on our country's farmers and consumers looking to source local food. Coronavirus is the latest in a string of misfortunes that have kept the farm economy down for several years: weather disasters, a trade war and, even before that, commodity prices have been below the cost of production. Another impact is the availability of farmers markets as some local governments have ordered that they be suspended due to social distancing. Many farmers depend on farmers markets for most of their sales if they do not have contracts with large grocers or restaurants and it is where consumers can contribute to supporting local and getting a sense of knowing where the food on their table is coming from. With restaurant business severely cut, farmers who sell meat and produce directly to restaurants are more dependent on direct-to-consumer sales. For many small farming businesses, having the ability to connect with customers, show their product, and sell directly from farm to table on a regular basis would be an extremely big win not only during the pandemic but integrating it into their everyday way of business. This is where I see blockchain technology coming into play.

Blockchain is being used to record when and where a particular variety of crop was planted, what fertilizers were used, when the crop was harvested, and where it grew. By tracking a product‘s journey from seed to the consumers hands, blockchain can also shed light on the supply management aspect, making it clearer where it was transported to, by whom, and where it will be for sale. Blockchain technology can also help farmers and retailers prove that products claiming to be local, organic or free-range actually are.

At BlockSpaces, our team has been working on an application that would not only do all the things mentioned above, but would cater specifically to local farmers in whatever city you reside in. Our Agtech industry solution is a full stack application that directly connects farmers to consumers allowing producers to quickly mitigate food waste when unforeseen circumstances affect their yields. Although distributors/packers are equipped to handle these variations, critical supply chain continuity can be disrupted if producers are solely reliant on these intermediaries. Additionally, in the US, there are many food safety and traceability regulations that are often handled by a distributor, and current yields are based on the demand of restaurants, grocery chains, and various other sectors and are not meant to be direct to consumers. This, again, creates reliance on other entities that leads to the inability for producers to be self-sustaining in times of crisis that disrupts these systems.

An app such as this would, without a doubt, make supporting local farms easier both for the farmer and the consumer. The consumer has the opportunity to source locally grown food from their community while understanding that their food purchases helped to create jobs and promote local economies. Consumers would be able to see on a map how many local farms are within their desired radius, what kind of products are available and have the opportunity to move away from solely relying on large grocers for their food. For the farmer, having the ability to have this kind of immediate reach to customers they otherwise wouldn't have the ability to reach is a feature that could keep many small farms alive during the pandemic. The ability to have that community connection while also simutainlously fighting hunger, for example, in locally designated food deserts, preventing land loss, and promoting racial equality for American farmers would be a win/win situation for all.

If you would like to learn more about our solution, and how blockchain technology is being integrated into business solutions, please visit our website https://blockspaces.io/agtech

If you would like to get involved and support the National Black Farmers Association, visit their website https://www.nationalblackfarmersassociation.org/