At the intersection of downtown Tampa’s East Whiting and North Jefferson sits a 1920s red-brick warehouse. Originally a wholesale grocer, it 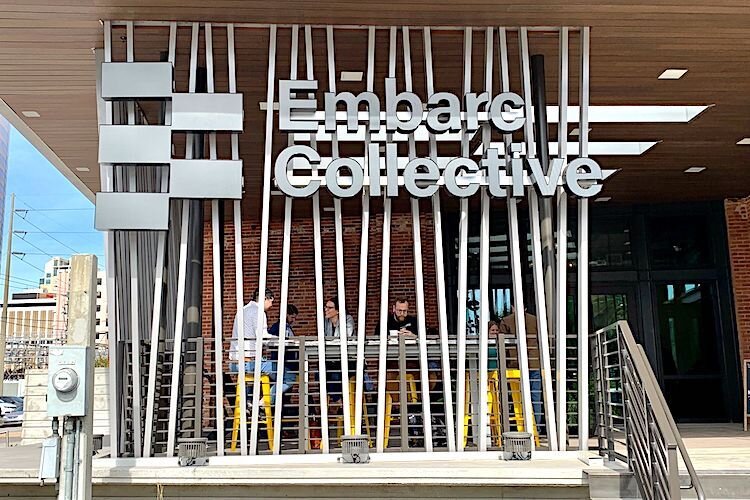 At the intersection of downtown Tampa’s East Whiting and North Jefferson sits a 1920s red-brick warehouse. Originally a wholesale grocer, it has gone through various conversions over the years.

Today, the historic building is home to the brand new Embarc Collective, an educational nonprofit organization whose goal is to enable Tampa Bay's startup talent to develop enterprising and prosperous companies.

Embarc Collective launched services and support last March, working offsite with 25 budding companies. As of its formal commencement in February, there are 43 startups working with the collective.

As noted on theEmbarc Collective website, “building a startup requires a continuous learning environment where a team is in close proximity to other builders who share a willingness to explore what is new and untested.”

“We want to be game-changers to companies that are developing and hopefully be a game-changer for the Tampa Bay Area,” says Embarc Collective Investor Jeff Vinik. “We want this to be known as one of the top start-up cities in the country, and we will get there. I think a reasonable time frame is five to 10 years.”

And Embarc Collective is doing just that by bringing together startups, venture capitalists, academic resources, and startup-focused partners under one roof. The collective’s staff includes executive advisors and function-specific experts who deliver individualized support to startups.

“This location says so much about what Tampa is,” says Mayor Jane Castor. “You're taking a hundred-year-old building that has lived through so many iterations, and turning it into an innovative, state-of-the-art, innovative space where we have 43 startups.”

Inside the 32,000-square-foot building are open collaboration tables, conference rooms, a library, multiple offices, and a 250-person capacity events space. Keeping with the times, as well as the needs of their members, are a podcast studio, nursing room, prayer room, and a quiet room where workers can seek reprieve from the bustling open areas.

You will also find an onsite kitchen and snack area because, after all, sustenance increases brainpower. A public-facing area of Embarc Collective isEndeavr Coffee, the Blind Tiger-run coffee space. Here, members can not only enjoy food and beverages but also take meetings and collaborate with non-members.

The building is split with a 20,000-square-foot space and a 12,000-square-foot space intended for larger startups. The architect on the project wasKWJ Architectsof Tampa led by Eric Kreher, who earneda master’s degree at the University of Florida School of Architecture. KWJ worked with interior designers Kreher Barna Design Studio led by Catherine Kreher and Jan Barna.

“All of the primary offices in the main building are fully occupied right now and about two-thirds in the additional space, which is really exciting,” says Dan Holahan, customer success associate. “We’ll see lots of movement in the coming months if we do our job right.”

Members can choose to have private space, office desk space, or collaborate in shared workspaces.

“While the space serves as the physical medium through which everybody can come together and collaborate, our offering is really rooted in hands-on, customized coaching that comes from theEmbarc Collective team,” explains Holahan.

“The members are the drivers of their journey. At Embarc Collective, we help them in where they identify gaps and in areas they would like support.”

Embarc Collective particularly encourages startups building technology-enabled software solutions to apply for membership, as the organization believes those types of startups will benefit most from the customizable, quality support offered. The collective evaluates each startup's potential and viability and assesses whether the support offered matches the specific startup needs.

Each startup founder has access to an executive adviser who is trained on a milestone-focused methodology and will provide consistent, customized, quality support to push your business forward.

Embarc Collective takes no equity in the startups it supports. Each member pays a highly-subsidized monthly membership fee, which covers 40 percent of the Embarc Collective operation costs, and the remainder is fundraised.

For members of Embarc Collective, there is total flexibility; everything is driven by the needs of each startup. There are no deadlines for the application process, there isn’t a strict curriculum, and there is no set timeline in which startups can remain with their organization.

Gone are the days of Tampa not being perceived as a city of innovation, largely thanks to Tampa Bay Lightning owner Jeff Vinik, who committed $10 million to establish and create Embarc Collective. Vinik noted that the region paled in comparison to cities like Nashville and Austin in terms of the rate at which it developed entrepreneurial talent.

Vinik studied innovation hubs country-wide in the process of launching in Tampa. He also hand-picked just the individual to lead Embarc Collective, Lakshmi Shenoy, who was then VP of strategy and business development of Chicago’s top-ranked tech entrepreneurship hub, 1871.

“After Jeff Vinik approached me about this opportunity, I did a deep investigation about making the move,” says Shenoy. “And it became apparent to me that Tampa Bay is a place where builders, like all of us, can make an impact, not only on a company but also on community.”

“We want to be game-changers to companies that are developing and hopefully be a game-changer for the Tampa Bay Area,” says Vinik. “We want this to be known as one of the top start-up cities in the country, and we will get there. I think a reasonable time frame is five to 10 years.”

Along with working with startups, Embarc Collective will also focus on community outreach. It expects to host 100 public events on entrepreneurship, innovation, and technology this year.

“While our core is very focused on the technology startup, it’s also very important to us that we’re serving the community,” says Shenoy.